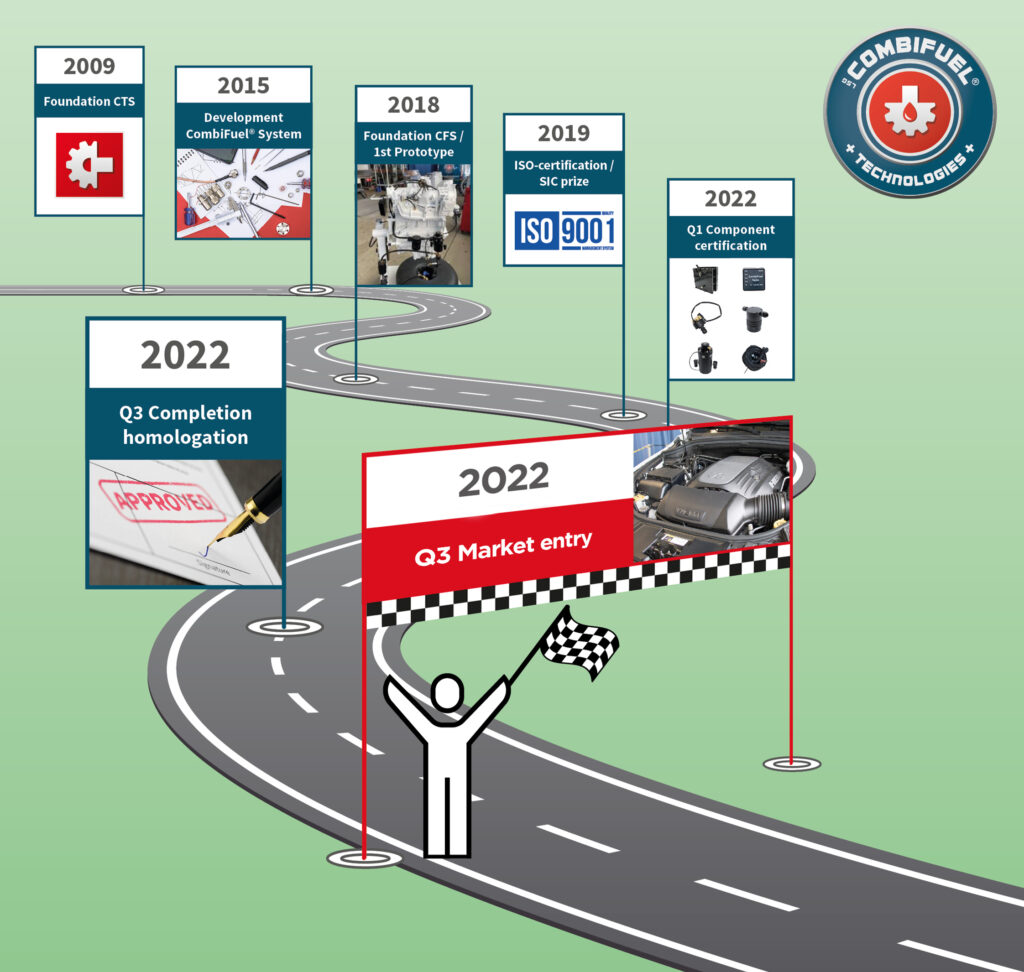 The parent company CleanTech Swiss AG was incorporated in July 2009 to import retrofit equipment and expand the LPG filling station network. Due to increasing dissatisfaction with the existing products in the market, the idea was born to develop something of our own with the aim of creating a state-of-the-art and intelligent solution that is environ­men­tally friendly and can be used in the various combustion engines as well as being cost-effective. The environmental consciousness was and is our driving force.

Development and initial tests for Combi­Fuel® were started in 2015. Over the next five years, the original product idea was repeatedly adapted to current conditions. By gaining new insights, our product con­stantly matured.

CombiFuel Swiss AG was officially in­cor­porated in 2018, when the first prototype was ready. The first exhaust gas tests carried out by the accredited testing organisation FAKT yielded very positive results. Emission reductions of up to 80% for individual pollutants were recorded.
These results encouraged the team at CombiFuel Swiss AG to develop the world innovation CombiFuel® to the point of series production, which helps the environment now (and not just in the distant future).

CombiFuel Swiss AG achieved ISO-9001 certification at the beginning of 2019. An important milestone was reached. In July 2019, CombiFuel Swiss AG officially became a manufacturer. In the future, the focus was now on putting the promised high standard into practice and pro­du­cing the individual components ready for series production. One by one, each component was subjected to ageing, acid, resistance, pressure and tempe­ra­ture tests at an EU-accredited laboratory in Holland.

Furthermore, in 2019 we finished 10th out of 120 participants in the Swiss Inno­vation Challenge. We are very proud to have won the special prize in the Internationalisation category, which was presented to us by Federal Councillor Guy Parmelin. One year later, our CEO, Eckhard Tilhof, looks back on this event with pride.

You can find the whole interview here.

In March 2022, all components of the Combi­Fuel® system have passed the tests and are certified according to UN ECE R 67. At the same time, our converted vehicles will be transported to an accredited laboratory for emissions testing in accordance with WLTP- (“Worldwide Harmonized Light Vehicle Test Procedure”). In future also RDE (“Real Driving Emissions”) standards. Following these tests, UN ECE R 115 approval is obtained for various countries and vehicle types.

The market launch for the first products is scheduled for August 2022.